The Heart of a Hero

I recently finished reading The Steel Wave by Jeff Shaara.  It’s historical fiction based on the D-Day landings and subsequent battles in northwest France.  The book led me to think a little more about Heroes. 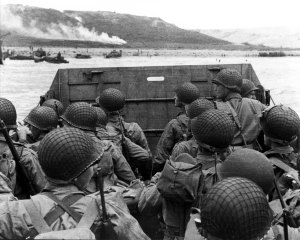 1) Heroes aren’t usually on the side with all of the firepower.  When the 1st and 29th Divisions landed at Omaha Beach on 6 June 1944, those men were given the immediate choice of heroism (up the cliff) or cowardice (stay huddled at the bottom). It’s hard to be heroic when you’re expected to win.  However when you are evenly matched or especially an underdog, conditions are ripe for heroism.

2) Heroes take care of the helpless.  The Allies knew that the French civilians in and around Normandy didn’t ask to be in the middle of an enormous military operation.  In addition, they had been under the unkind rule of the Nazis for almost 4 years.  So, the soldiers (mostly) took special care not to raid civilian farms, instead eating K and C rations until they were almost repulsed by them.  As mentioned in the cinematic masterpiece Spider-Man: “With great power comes great responsibility.”

3) Heroes don’t gain that status by the use of brute force.   When presented with a strong enemy position, the airborne troops who landed in the early hours of D-Day couldn’t succeed with a direct frontal assault.  They had to look for soft spots in the enemy line or try to get around the end of the enemy positions.  Throwing yourself in front of any problem…be it a tank or a cranky infant is just a good way to get rolled over (or puked on).

“So what?”, you might say.  I’m not fighting a war or even eating bad food.  Well, are you in a position at work where a decision has the support of management but you know that the results could be disastrous?  How about in your town…are you helping those around you who don’t have adequate food or clothing…or maybe just need a friend?  Is your status at home (as a spouse or parent) based on the power you have to get your way or on the work you do to help others?

If you’re in any of those situations, I think the conditions are right for YOU to be a hero.  So how heroic do you feel?  Is there someone around you that you can be a hero to today?